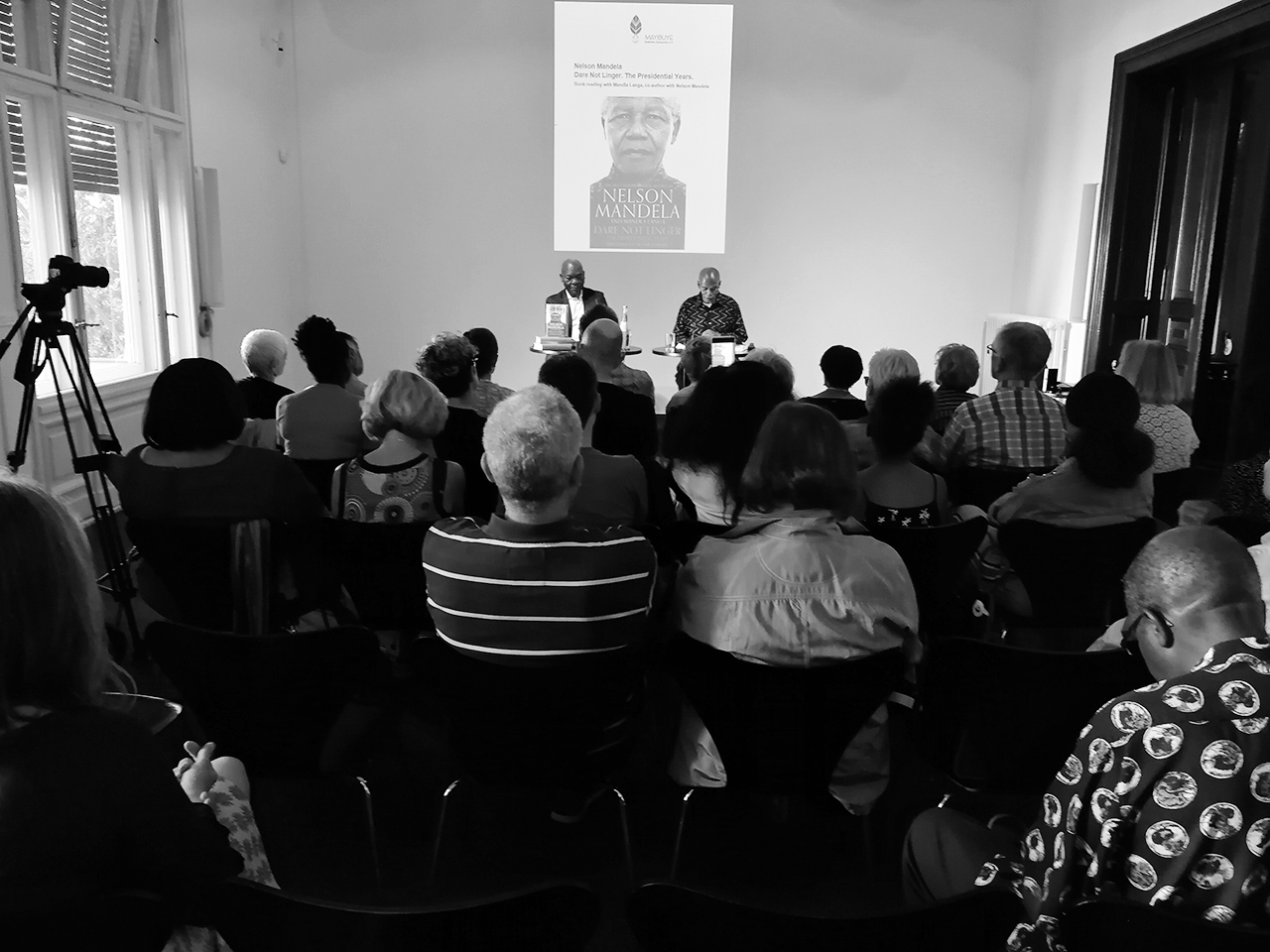 Review of the Book Reading with Mandla Langa, co-author of Nelson Mandela’s last book Dare Not Linger – The Presidential Years
On 14 July 2018, Mayibuye Südafrika Community e.V. had the unique opportunity of hosting the renowned South African novelist and journalist, Mandla Langa, for a book reading and discussion of the above mentioned book. He gave a truly riveting account of the crucial years of Mandela’s life just before and during his presidency.
The book excels in giving a balanced insight into the political ramifications of the time during a very difficult period of transition and the first five years of the newly elected democratic government. For those who had not read the book prior to Langa’s talk must have been inspired by the author’s very detailed and clear vision of what Mandela, the human being, the leader, the negotiator and the statesman had to endure. What was foremost in Mandela’s mind was to avoid – at all costs – a bloody confrontation with the apartheid Afrikaner Generals who had planned to derail the entire process of transition. The co-author told that in researching Mandela’s unfinished draft, detailed notes and archival material it was clear to see that there was the uncertainty and fear that the talks with the apartheid regime might break down. However, Mandela’s tenacity, shrewdness and determination to resolve what seemed insurmountable shone through. That was the breakthrough which avoided a potential civil war.
Langa emphasised that Mandela had never taken vital decisions without having consulted with others – within and outside of the ANC. Only then would he act. The late Prof. Jakes Gerwel emphasised this point very succinctly, “Mandela is a leader that throws up epistemological questions. We all cherish him as this leader – which he really was – but he himself had a sense of collective leadership. He always raised the issue of how does the individual relate to the collective, how is the individual’s experience and conduct influenced by the collective and how does it feed back to the collective?”
To the question of how Mandela the person compared to Mandela the statesman, Mandla Langa answered as follows: Mandela was someone who saw himself as a product of the people, one of a collective who fundamentally saw himself as an ordinary person who was not without faults and fallibilities. He was a person with strong principles of right and wrong but at the same time believed in forgiveness and the common decency of humankind.
One of the highlights of Mr Langa’s book reading-cum-talk was his answer to the question of how a novelist avoided the temptation of mixing fact with fiction. Mandla Langa explained that it was, without a doubt, a dilemma which he had to come to grips with. He needed a long period of preparation to ‘cleanse’ himself of his ways as a writer of fiction. In an interview with Sanele Dlamini of Creamer Media he stated that, “I am a novelist and my job as a novelist is to get into the skin of the subject, to emphasise and try to gain and think exactly how that subject must have thought.” He also had to research and study how memoirs and other factual material written by other authors were brought to the public. Through all this he completed what he called ‘ a labour of love’.
The audience was very appreciative and thrilled by Mandla Langa’s rendition of his work. Those who were familiar – even vaguely – with the South African liberation struggle and its transformation to a democratic dispensation in 1994 were impressed with the evening’s presentation.
We would strongly recommend to read the book.
Mayibuye Südafrika Community e.V.