Invitation to the Celebration of the Nelson Mandela Centenary 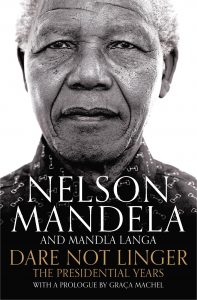 Dare Not Linger: The Presidential Years is a book by Nelson Mandela and Mandla Langa describing Mandela’s term as President of South Africa. It was published in 2017, four years after Mandela’s death, and is based on an unfinished memoir that Mandela had worked on after his term as president. The title comes from the closing sentence of his autobiography Long Walk to Freedom: “But I can only rest for a moment, for with freedom comes responsibilities, and I dare not linger, for my long walk is not ended”. 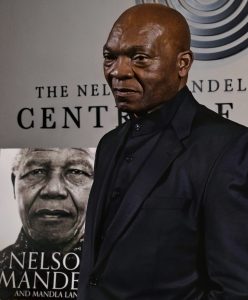 Mr Mandla Langa is a writer and journalist who has received a number of literature awards. To name a few: the Arts Council of Great Britain bursary for creative writing, the presidential Order of Ikhamanga in Silver for his literary and journalistic work and the Commonwealth Writers’Prize for his novel The Lost Colours of the Chameleon. He spent many years of his exile life in various African and European countries.

In 1974, he became actively involved as a director of the South African Students’ Organization (SASO), maintaining this position until his arrest in 1976 for attempting to leave the country without a permit. As a result he served 101 days in jail.  According to Charles Larson (editor of Under African Skies), Langa himself said that his arrest was due to sedition.

While imprisoned, Langa continued to improve his writing skills. After serving his sentence, he fled to Botswana, marking the start of his life in exile. He also spent time in Lesotho, Angola, where he participated in military training at the MK camps, also known as Umkhonto we Sizwe. In addition to Lesotho, Langa spent time in Mozambique, Zambia, Hungary and the UK. He held various ANC posts abroad, including cultural attaché in the UK and Western Europe.