Join us to a talk and discussion with Adv. Paul Hoffman (South Africa). He will share topics from his book (e.g. arms deal, Hawks, bread cartel …) as well as his insight into current developments in South Africa. 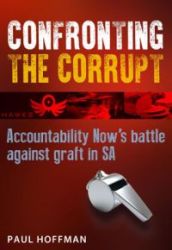 Please let us know if you plan to attend via this link.

South African snacks and drinks will be available.

Paul Hoffman SC, a native of Johannesburg and a Wits graduate, practised law at the side bar from 1975 to 1980 and at the Cape Bar from 1980 to 2006. He took silk in 1995 and acted on the Cape Bench at the invitation of three successive judges president. After retiring from the Bar, he was founding director of the Centre for Constitutional Rights and co-founder, in 2009, of Accountability Now, both NGOs that promote constitutionalism.

He is best known for his work on the irregularities in the arms deals, on the unconstitutionality of the Hawks and on the bread cartel case in which a general class action was developed by the courts.

Yoga and long dog-walks on the beaches and mountains around his home in Noordhoek, Cape Town help keep him inspired to seek that elusive better life for all. He is the author of many articles and one book, “Confronting the Corrupt” published by Tafelberg.