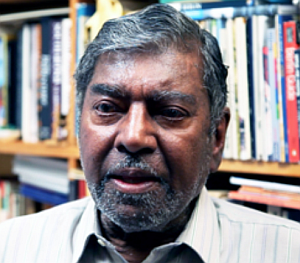 On 11 February 2014 our friend and comrade, Eric Singh, passed away leaving behind his beloved wife, Karen, and a host of people with whom he had been in close contact over the years, both in Germany and South Africa.

To these ones especially his absence has been sorely missed. As a stalwart of the (South African) struggle, he dedicated his life to freedom and justice to the extreme and was very outspoken about matters, mostly political, that he felt needed critical attention. Many remember him for his clearcut views, arguments and analytical observations, whether in journalism or public debate. He was not only astute in matters concerning South Africa but also knowledgeable about German politics.

Eric’s death has been a great loss to the South African diaspora, for he was always actively trying to rally his fellow South Africans in a positive and caring way. His presence in all its facets is sadly missed. However, what he stood for and believed will not be forgotten. Nor will Eric – the freedom fighter, the analyst, the writer, the adviser, the companion and the friend – be ever forgotten.

Eric we salute you and cherish your deeds and thoughts!

In conversation with Eric Singh (video)